This newest generation tailgate bar is microprocessor controlled and features either Red or Amber Sequential Scanning LEDs for your Turn Signals, Red LEDs for your Brake Lights, Red LEDs for Running Lights, and White LEDs for Reverse Lights!. 3M Self-Adhesive Pads mount the LED Brake Light below your tailgate so the bar itself is not visible, only the light emitting from it.

We now have 2 versions of this bar, you can get it with Amber Turn Signals, or Red Turn Signals.

Please note that this item requires wiring. Detailed instructions are included. If you would like to reduce the required wiring, it is recommended that you purchase the FireStorm Trailer Plug Controller (Part # 10999) that will allow you to use your factory trailer hitch plug.

Brought to you By Highend car stereo

Memphis Car Audio is proud to announce the all new Power Reference PRX amplifiers for 2013.

“The 2013 Memphis Car Audio line will feature more new innovative products than ever before. There will be major strength added to PRX amplifier line as well as the M-Class. Special application amplifiers, the SA series, add to the installation possibilities for specialty 12volt retailers. We will show all of these models at CES – booth 2211 in the North Hall. Our sales staff members will be showing PRX samples on the road as they present our 2013 program to dealers prior to CES 2013″ Andy Allen related to 12voltnews.com.

Unique to the Power Reference PRX range is the top mounted controls that are covered by a removable top plate.  When the installer is setting up the amplifier, the controls are easily accessible on the top of the chassis.  After the initial set up is complete, the top panel is installed, giving the amplifier a sleek, clean look.  All models include a dash mountable Remote Level Control, enabling the user to have fingertip control of the output of the amp.  High and low level inputs enable the PRX amplifiers to be easily integrated into any vehicle.  The built-in 45Hz Bass Boost is adjustable from 0-12dB for extra emphasis on bass.

Lexani Wheel Corporation, world leader in custom luxury wheels, rims, grilles and aftermarket automotive products, has introduced a collection of four cleaning productsdeveloped for automotive enthusiasts who want nothing but the best when it comes to caring for their vehicles.

Products available in the Lexani Car Care System line are a Spray Wax, Instant Detailer & Gloss Enhancer, Tire Shine, and a Wheel & Tire Cleaner. All cleaning products are made from superior formulas created to prolong that “fresh from the showroom” feeling.

One-step liquid wax than can be used on conventional or clear coat paints.  Removes road film, grease, tar and bugs and leaves no buffer marks, white/powder residue or streaks on black cars.  Also hides swirl and light scratches.  Can be used under the sun and on semi-wet cars.

Quickly removes fingerprints and buffer smears for a showroom shine.  Works great on paint, glass, and chrome.  Can also be used as a dry-wash on vehicles that are not heavily soiled—spray on and wipe off with a soft, clean, dry cloth for  instant deep gloss finish.

An environmentally-friendly, water based dressing containing natural oils and polymers that creates a high gloss, long lasting shine.  It’s so safe to use that it can be applied to rubber bumpers, plastic cladding, door seals, and trimmings to improve their appearance as well.

Highly concentrated, fast acting, biodegradable degreaser that breaks down ands removes grease marks, grime, and brake dust from tires and wheels. Can also be used on motorbikes and other vehicles.

Principal in PIE’s presentation is a demonstration of interface and device charging technology that enables the playback of digital audio from the new iPhone 5 and the just-announced fourth-generationiPad to a standard source unit, such as a car stereo or portable speaker system. PIE plans to deploy the technology in an array of new products over the coming year.

“Apple’s new offerings are pretty exciting devices,” said Eddie Lucero, chief product engineer at PIE. “The Lightning connector enables the company to downsize its components to meet an ever-increasing consumer demand. To that end, we are being just as diligent to deliver compatible technology solutions to our customers as well.”

In addition, PIE will demonstrate its AV-IPA, an audio / video interface with 2.1-amp charging circuit designed for the higher power requirements of the second- and third-generation iPads. The Apple- certified interface also gives the user direct control over the video output setting of the iOS device.

The new generation of XPRESSSTART solutions from Directed, the worldwide leader in vehicle remote start and security, promises to make Mercedes integration, literally, a snap.

“This product raises the bar, Directed XPRESSSTART provides a sleek solution for reliable Mercedes integration,” said Peter Fazi, VP Business Development. “Our dealers have been asking for this and we’re proud to be providing an all-inclusive solution.”

Does a dealer’s customer want the ultimate smart control, smart car or to keep their factory transmitter? No problem.

Directed XPRESSSTART is plug-and-play compatible with Directed SmartStart systems – so model numbers ending in “SS” have everything a dealer needs to start and control a customer’s vehicle from their smartphone for iPhone and Android devices.

K40 Electronics is releasing the Defuser g5, its fifth generation Defuser model.  K40’s Defuser is the most advanced, sophisticated anti-laser technology ever designed to instantaneously detect, notify the driver and jam the pulse laser light signal transmitted by every type of police laser gun. This allows a driver to avoid detection and ultimately a speeding ticket.

The biggest enhancement found in the new g5 model involves its Sync Interface.  When a laser gun is detected, the sync feature fires infrared lights signals from up to four transponders simultaneously.  This creates more jamming output to the laser gun than ever before.

The Defuser g5 also delivers greater performance for owners by providing 60% more Reception Diodes that will, in turn, increase detection of laser gun signals. In addition, there are 10 new, more powerful Laser Defusing Diodes in each of the four transponders.

“We believe that the improvements we’ve made with the Defuser g5 helps K40 continue its mission of offering customers the most technically advanced products available,” said Peggy Finely, President of K40 Electronics.

Brought to you by Highend Carstereo

This is a one of a kind 2010 Dodge Charger completely done up in the “Dark Knight Rises” theme by Highend Car stereo.

JL Audio system with a custom 19″ panel for XBox 360 to be played on while tailgating or at car shows.

22″ black Viper wheels with a flowmaster exhaust and Eihbach suspension.

This vehicle has some engine upgrades with a nice amount of power.

Smoked out the headlights to keep with the blacked out look of the whole vehicle.

We managed to have an amazing sounding system while all the while keeping the factory radio.

A Viper 5704 alarm/remote start with a blue tooth smart start right through the customers Iphone.

Door sill plates with the Dark Knight theme to finish off an amazing car! 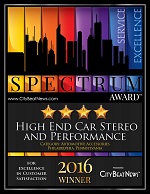